Each week, I look forward to a new episode of On Being to download and accompany me to my local Planet Fitness. Lured by the promise of hearing a new installment of Krista Tippet’s show, I muster the discipline to dutifully pound the treadmill for fifty minutes. As I provide my aging muscles a modest work out, I also exercise—often  strenuously—my imagination, my empathy, and my spirit.

Tippett’s interview with poet Claudia Rankine (aired January 10, 2019) provides a perfect example. The two women held a candid, powerful conversation about the pain—often invisible to white people—that is woven into the everyday reality of people of color in this country. They did this in a way that avoided rancor, blame, and bitterness, even as they dove into a fraught topic—one that often divides people rather than bringing them closer together.

Rankine shared passages from her 2014 book Citizen: An American Lyric, a collection of poems that gives voice to and documents the cumulative imprint of the exhausting reality of being black in America. She writes about the times exchanges across race violate the space between two individuals: “Certain moments send adrenaline to the heart, dry out the tongue, and clog the lungs. Like thunder they drown you in sound, no, like lightning they strike you across the larynx.” 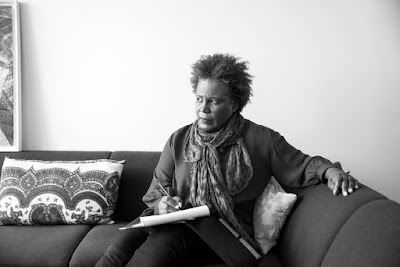 She describes the daily questions she and her black friends ask themselves after some encounters with white people, both strangers and intimates: “Did he say that? Did I hear that? Did she mean that?”
As I listened, I thought about how many ways I, as a white person, coast through life and how much work I still have to do to unlearn my habits of mind, or to put it more bluntly, my racism.

This episode of On Being made me consider what it means that I walk through the world without needing the armor some people must don just to get through every day. And worse, how many ways I have, through my own ignorance, shot arrows of pain toward others.

Rankine also related a story that gave me hope. Sitting on an airplane, she made friends with a white man. After some good conversation, the man said something that revealed he did not understand his own racism, did not see her. “That was not a good thing to say,” Rankine told him and explained why.

After which he asked, “Did I say anything else?”

The story went on. But I love ending it right there. Guilt ridden apologies will only prolong the injury; perhaps humility and willingness to learn can begin the process of repair.