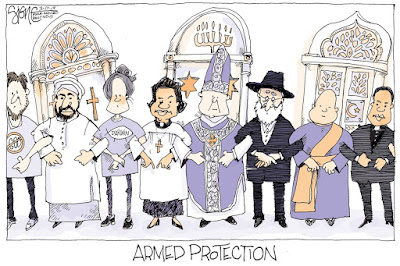 Philadelphia cartoonist Signe Wilkenson rarely adds words to accompany her poignant artistry. But on March 17, 2019, when the above image was published in The Inquirer, she added her voice:

“After the Pittsburgh synagogue shooting last fall, I drew the initial version of this cartoon but for timing reasons it never ran. I’m sorry but not shocked for the opportunity to redraw it now after the unGodly carnage at the mosque in Christchurch, New Zealand. There aren’t enough armed guards to protect every church, synagogue, mosque, ashram and temple around the world. It might be time for God’s children to figure out a way to get along.”

And then tragically, on Easter Sunday, another unthinkable atrocity occurred, targeting innocent people in churches and hotels in Sri Lanka. I felt the tremors of this attack – 9000 miles away, in the safety of my home – on the second day of Passover. Each year since I was a child, the recounting of the Passover story has been a source of hope – when we re-dedicate ourselves to eradicating enslavement, oppression, and inhumanity so that the forces of justice and freedom will prevail. It is this mandate, embedded in my genetic makeup, that opens my heart to the dignity and humanity of each soul – it compels me to believe that we can indeed build the beloved communities that Rev. Dr. Martin Luther King dreamed of.

This past year, Interfaith Philadelphia has engaged in A Year of Civil Conversations, offering witness to thousands of people in this region seeking ways to cross thresholds, build bridges of understanding, link arms, and learn to converse authentically and respectfully across differences. And yet the inevitable question comes back to haunt us: is this work enough and can we work quickly enough?

A recent story offers wisdom from the five-year-old son of Rev. Nicole Diroff, our Associate Director. Nicole and her family have a vibrant church home at Tabernacle United Church, and their son Elliott attends a Jewish pre-school in their Philadelphia neighborhood. On the Monday after the Pittsburgh shooting, Elliott wondered why there was a policeman at the door of his synagogue school. That evening, when Nicole had the sad task of any parent who has to “explain” why someone would shoot people in their house of worship, she cushioned the blow by explaining that that is the work that she does with Interfaith Philadlephia to prevent this sort of hatred from growing. Elliott thought for a moment and said, “I guess you just weren’t able to work fast enough.”

Yes, “It’s time for God’s children to figure out a way to get along..." And we do know how to do this. The question is, do we have the courage to harness our greatest resources, overcome the forces of despair, invest in what is possible, and link arms to protect one another? Please join us to create a different future.
Posted by Interfaith Philadelphia at 6:18 AM 1 comment:

A Year of Civil Conversations Religious Leader Reflections: " I Am What I Will Be" | by Rev. Josh Blakesley

On June 20th, 2013 Krista Tippett spoke with Joy Ladin, Gottesman Professor of English at Stern College for Women of Yeshiva University in New York, an author of seven collections of poetry, and currently writing I Am What I Will Be: Reading God and the Torah from a Transgender Perspective. Six years ago, Joy transitioned from male to female identity. She became the first openly transgender professor at an Orthodox Jewish institution.
In her conversation with Krista, Joy shared that throughout her life her body didn’t match her soul. As she spoke, I couldn’t help but be enlightened by how her story helps all of us reflect on how gender shapes the ongoing journey of being “at home” in ourselves.
I found it particularly poignant what Joy shared about the convergence of her Jewish identity with that of her gender identity and expression. For example, she connected gender identity with the Torah—specifically that God is portrayed as a genderless character [though male pronouns are often used], and God doesn’t have a body. As a child, Joy also had male pronouns and didn’t feel like she had a body. That profound spiritual connection was a comfort for her. 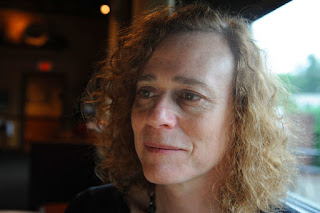 Further, Joy discussed the concept of covenant in Jewish spirituality and practice, and how some view her transition from male to female identity as a break in covenant. What particularly caught my attention was Joy’s wise conclusion that most people who call her transition “selfish” or “immoral” are not really referring to a breaking of covenant between God and humanity or a type of moral construct. Instead, they view Joy’s physical sex at birth (male) as a promise to them—that Joy was that gender, consistent with the visible body. And that gender covenant, Joy stated, was a promise she couldn’t keep because the man she was presenting herself as was not who she felt she truly was. She went on to share that she continues to break this “gender covenant” even after transition, because though she may now appear “female” to most people, she still has an X and a Y chromosome. So that covenant is still not fulfilled. In the end, Joy defines gender covenant as a promise about who you are. That is not bound to binaries or appearances.
Towards the end of the podcast, Joy expressed her gratitude for those people in her life who can see and embrace her humanness without the normality of gender. They respond to her with love, compassion, and honest questioning even without the outward binaries that we so often base our labeling of someone as “human.” This is one of the major insights and pieces of wisdom I glean from Joy’s journey, as well as the wisdom of my transitioning or recently transitioned transgender friends and colleagues. We don’t have to be binary or "normal" or “same” to be human. We can be seen, accepted, recognized, and loved without the labels and so-called norms.
And since “On Being” is a podcast about identity, it’s only fitting that Joy closed with these words: “Becoming is always going to be a greater proportion than being.”
Posted by Arisha Syed at 8:42 AM No comments:

This spring break, I had the privilege of volunteering my time for a week with Interfaith Philadelphia as a part of my alternative break program. The week was full of different trips and experiencing different faiths and traditions. I was exposed to faiths I did not even know existed before the week, and others I knew little or next to nothing about. The week also included experiencing the trip with other students from a different college.
My faith tradition is Catholic, my Theology degree is from a Catholic university, and the foundation of that degree is a Christian-based understanding. Therefore, to be introduced to faiths that did not have Christ as a prominent figure was amazing! You may tell yourself that you will “get around to exploring other faiths”, and it just never happens because life tends to get in the way. So this week was a great way to unplug from my world, experience someone else’s, and see the world in an entirely different light. It also allowed me to gain and grow from the others members of my group and the other college too. For example, one very special moment I had was from one of the other students from Villanova at our trip to a mosque. He told me that he was praying for me about a very personal situation I shared the day before. He also encouraged me to continue to be open about my struggles.This moved me and truly touched my heart because we were complete strangers, and yet we were praying for each other. It was a beautiful example of how different faiths can not just get along, but really appreciate and understand each other. We are two different people from two different colleges and faith backgrounds, and I said something that was interesting to him, and he responded in such a beautiful way. 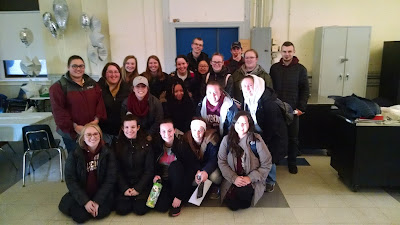 I am thankful for Interfaith Philadelphia for providing me with that encounter, and for the eye-opening experiences and opportunities of the week. In a world that often emphasizes the negative dialogue between religions, it was incredible to experience tons of positive religious dialogue. I thank Interfaith Philadelphia for fostering an inquisitive mind in myself concerning other faiths, and for giving me the tools needed to ask curious questions without accidentally being hurtful or insensitive. It's important that we look toward civil dialogue and friendship instead of division and exclusion. This week was a great chance to counter those harsh headlines and prove that interfaith dialogue can be (and should always be) filled with peace and positivity.
Posted by Arisha Syed at 10:12 AM No comments: